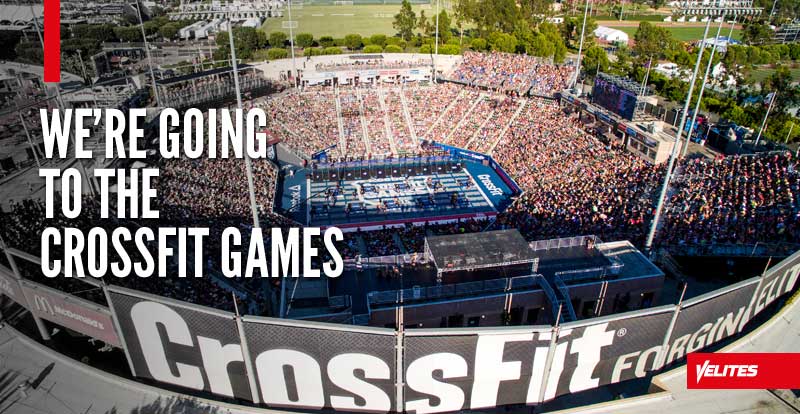 The team at Velites is packing its bags with swimsuits and as many Vropes as possible, because we are going to the CrossFit Games in Carson, California.  Visit us at our booth and get 15% off all Velites products, or shop online and get 10% off everything on Games week (18th-25th July). Use the code VELITESATTHEGAMES.

We’ve had lots of fun in the first half of 2016, watching you guys tear up your double unders, just getting better and better. There’s more to come, we’re sure of it and we couldn’t be more excited. Now, we’ve got the chance to spread our love of fitness in the States, and as is becoming tradition, we’d like to share our predictions for who to watch over this most special weekend.

You’d have to be watching the Games on another planet to think that Fraser isn’t a shoe-in for the Games top spot this year. Second place two years in a row, and did you see him at Regionals?

This year, Fraser doesn’t just want to win the Games, he wants to win everything. Every event. This year, Fraser wants to show everybody that he is the best CrossFitter in the world. Bring me Rich Froning, he says, and I will crush him.

Looking forward to: Everything, especially if it’s a multi-movement chipper, so he can show just how championship-ready he is.

If you’ve been watching Ohlsen’s oly lifting this year, you’ll have noticed that behind the smiles, he’s not playing around. Few of the top dogs can cycle a heavy barbell like Ohlsen, and with a few years experience behind now, 2016 looks good. All he needs to do, is to stay consistent across the weekend, something he hasn’t quite been able to manage so far.

Bridges fever has struck, and everyone’s going crazy over the veteran CrossFitter and his most excellent moustache and lion’s mane combination. Bridges didn’t make it to the Games in 2015, and man, did he make up for it in 2016. He destroyed events at Regionals, beating guys much bigger than him to take wins in the most unlikely places.

The only person more excited about Josh Bridges going back to the Games this year than the fans, is Josh Bridges. Look how excited he is.

Panchik is like the pitbull guarding the backyard. He’s going to bark and bark, and eventually, if you get too close, he might bite you. He comes close every year, closer to the top spot every year, and if that tenacity holds up in 2016, this could finally be his year.

Finishing the day with a lot of heavy back squats at 400. @reebok @crossfitgames @killcliff

She had a rough 2015 Games, but looked strong at the Regionals. The former champ has everything it takes to win, including the strength and the stamina, and things go her way later this month, we could see an epic comeback.

Some fun little weightlifting complex from this morning… Every minute on the minute for 8 rounds of: 1 behind the neck push press 1 push jerk 1 squat jerk!!! Fun fun #workhard #beproud #havefun #roadtothegames #enjoythejourney

Sara needs this win so badly this year. Many believe that she’s been the best CrossFitter in the world for some time, she just misses out in competition by a hair. By far one of the strongest female athletes around, Sigmundsdottir has a ferocious engine to match. It’s hard for us to see how anyone could take her this year.

She’s an Olympic sailor and one of the most conditioned athletes in the field. Combine that engine and her experience under pressure with a capacity to lift big, and you can’t count Tunnicliffe out, even if she’s the underdog.

At 33, she’d be the oldest champion the Games has ever had, but when you’re an Olympian, that really doesn’t matter.

Bridgers has been to the Games before, and she’s come close before. In 2014 she finished 6th overall, and took a bit of a tumble in 2015 with 24th, but if her Regionals performance is anything to go by, Bridgers is planning on taking nothing less than the top spot this year. She has the experience and the ability to do it, but she’ll need to work very hard.


This year is going to be the most fiercely contested CrossFit Games ever, and since last year was fun, but filled with familiar workouts, we’re expecting some pretty wild curveballs in 2016.

We can’t wait to see you all at the Velites stand!!!