Almost ten years on from the first CrossFit Games, it’s safe to say that we’re getting past the point where claims like ‘CrossFit isn’t safe’ and ‘You’ll get injured if you do CrossFit’ can be pretty easily brushed off. If you’re silly and irresponsible, if you let your ego take charge of what you’re doing in the box, then sure, CrossFit can be dangerous. So can ice skating, hockey, football or gymnastics.

As a beginner, though, what’s your bench mark? How do you know how far to push it, and what are movements supposed to look and feel like? Fortunately, if you’ve got a coach who gives a crap about not just your fitness, but your overall health, wellbeing and safety, then following their advice is probably the best bet, regardless of how experienced you are. 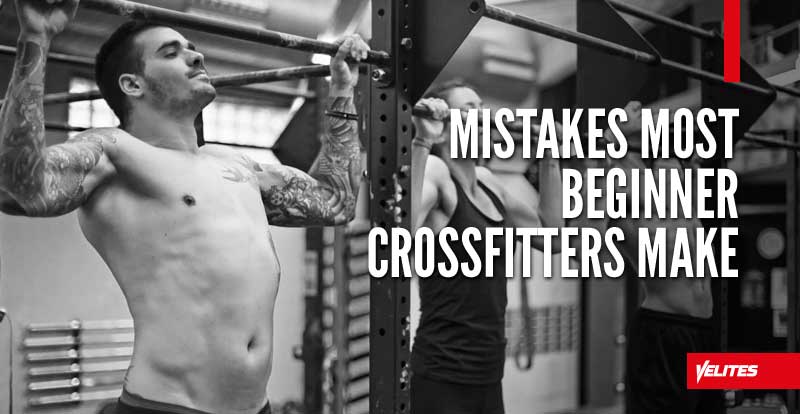 Listen To Your Coach

You know why it’s good to listen to your coach and be safe in the gym? You know why it’s a good idea to focus on being as fit as you can be, as strong as you can be, without going absolutely wild every day? Because unless you’re damn close to getting to Regionals, or the Games, or you’ve got some other reason for going full-on (like regular competitions), there’s no real reason for you to trash your body with every workout. That’s not to say that you shouldn’t give 100%, but if you’re feeling like crap, forcing yourself to push, push, push, isn’t all that effective. That brings us nicely to the first point, and the first mistake beginners often make.

We want to know what mistakes you’ve made, what they taught you, and what advice you have for other people. Let us know by joining Velites on Facebook.

Don’t get sucked into a competition mindset right away

Day one at the CrossFit box, you’re going to see people who have been there a lot longer than you have. They’ll be doing all sorts of crazy shit you’ve never ever seen before. Then, when the buzzer sounds and the music is blaring, everyone will have their game faces on and you’ll be thrown right into the middle of it all.

Relax. CrossFit does a great job of making it feel like you’re going into your own version of a warzone with every workout, but you’re not. You’re going to be fine, so take your time, figure out the movements, and get out of it what you want to get out of it, not what you think you should.

CROSSFIT BEGINNERS BLOG: Coach Eddie taking the evening class through the BURGENER WARM UP. This is something we go through a lot…..why? You ask………because we need to get it right…..and unless we can be throwing twice our weight over our heads…..it’s not perfect. And isn’t that what we are all trying to achieve? #crossfituk #crossfitcimmunity #crossfitbeginner #crossfitcoach #personaltrainer #pt #technique #tekkers #fitfam #fitspo #gymlife #instafitness #cleaneating #happy #handsintheair #burgenerwarmup #olympiclifting #barbell


Everyone’s there for their own reasons

You don’t need to look like that girl or that guy. They can do 30 handstand push-ups in a row? Great. She’s got abs like you’ve never seen? You can have that if you want, but it’s not a requirement. Not everybody who goes to a CrossFit box is there to become the next Brooke Ence or Rich Froning. Some people are there to relieve stress, others want to rehab creaky joints. Don’t get caught up in someone else’s ‘why’. Focus on what you want.

A good coach is always going to insist that if you’re new, you scale workouts and movements accordingly. But, it’s tempting, when you see everyone else lifting big weights and swinging around like gymnasts, to want to jump right in. That’s a bad idea for two reasons:

First, you could hurt yourself if you’re not used to moving that way. Second, doing unfamiliar movements badly is so much worse than scaling and learning how to do them correctly. Building up a kettlebell swing with bad form, when you could have spent time learning how to move well, is a sorrowful waste of time and energy.

Take double-unders, one of the most frustrating movements there is (right behind snatch). Again, you’ll get ideas because you’ll see other people jumping rope and turning over double-unders like it’s nothing. You’ll try it, hit yourself in the ankles, over and over. It’s good to fail, because that’s how you learn, but expecting to be able to do something which is damn hard, and just because you think you’re fit or move well, that’s not a golden ticket to anything at all. Practice and determination.

Not backing yourself enough

To the same merit as getting frustrated, one of the big mistakes beginners make is not backing themselves enough. Whether it’s because you’re timid generally, or because you think you might get hurt, or that there’s no way you could ever do or lift that, you’d be surprised.

It’s like Henry Ford said, “Whether you think you can or you can’t, you’re right.”

Not trusting your body

This is a similar point to the one above, but more specifically, what we’re talking about here are the times when you attempt a movement, but don’t fully commit. In CrossFit, as in life, the only way to get the most out of anything is to fully commit to it, and in many cases, if you don’t fully commit, it won’t happen at all. Double-unders are a good example, but so is something like a box jump. Commit fully to a box jump, believe that you can do it, or we’ll see you next week with some lovely scabs on your shins.

Hold on, didn’t we just say that you should scale appropriately? Yes, but at the same time, and this is related to not trusting your body, if you know that you can lift more or move more, and if your coach agrees, then don’t be afraid to show yourself what you’re really capable of.

CROSSFIT BEGINNERS BLOG: Young Carl in this wicked T Shirt getting on with his Snatch technique during skill session. The middle part of the class is possibly the most important. That being the skill session. This is where we usually learn new things. Making our bodies better. #crossfit #crossfitbeginner #cw1crossfit #crossfitter #crossfituk #snatch #heavylift #fitfam #fitspo #fitnessmotivation #fitnessaddict #fitnessinspiration #inspire #gymlife #barbelltechnique #instafitness #exercise #gymmen #workout #bodybuilding #functionalfitness #core

Quite specific, this one, and it’s understandable that when you first start, you’re going to be a little guarded in the way you move and how you get that barbell overhead. But, one thing most beginner CrossFitters struggle with, is not moving fast enough. When you lift weights, you’re asking your body to give everything it has to fight gravity and get that barbell onto your shoulders, or overhead. Moving slowly at the crucial point in a lift (that is, the point where explosiveness needs to happen) is working against you and your body.

Take your time setting up, then move your ass!

You’ve never done kipping pull-ups before. You don’t know what an AMRAP is. Nobody ever told you about start, launch and pocket positions. There’s no reason for you to know these things, and it’s your coach’s job to tell you. Shit, if your box has anything like a decent community feel, it’s everyone’s job to tell each other what these things mean. If you don’t know what something is, does or means, ask someone. They’ll gladly tell you.

You don’t need to buy your own barbell, but for the smaller things, like double-unders, having a good rope isn’t just going to help you to nail your technique down faster, it’s going to make you feel good. Check out the Velites Fire 2.0 jump rope, and see what you can do about that.

If you can’t see a theme running through all of these tips, it’s this: Enjoy yourself. Unless your goal is to go to the CrossFit Games, then figuring out what’s going to make you the happiest every time you step into the box, should be your priority. Don’t get caught up in what everyone else is doing, and back yourself — you’re stronger than you might think.