Last year we gace a shout out to a few of our favourite Velites-sponsored athletes, and while we’re super proud of how well they all did, it was even better to see a few of those new faces going up against some established names at the regional competition in Madrid. 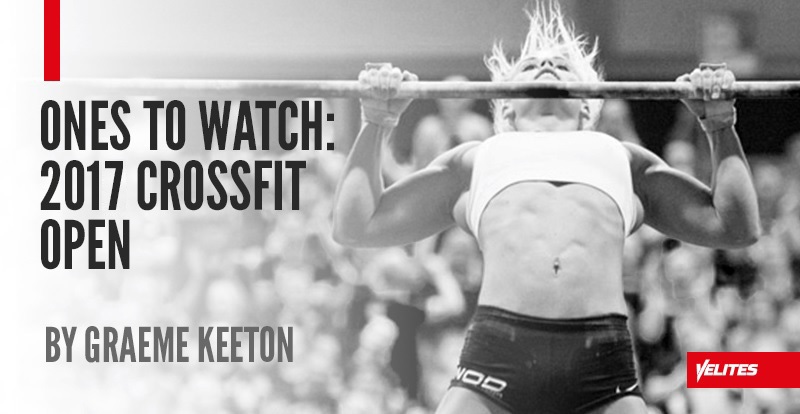 This year, we’re excited to welcome even more incredible new athletes, and a few Regionals veterans to the family, and we can’t wait to introduce them to you here, alongside some of the best CrossFitters in Europe. We’re incredibly fortunate this year, to be able to support great CrossFit athletes from Spain, France and the United Kingdom. You might not know their names now, but in five weeks, we’re sure you’ll be seeing some of these guys and girls pushing for the top spots on the Open leaderboard.

2017 CrossFit Open: What To Expect

Just like 2016 and every year before that, it’s impossible to tell exactly what’s going to come up in the Open. That said, after Games Director Dave Castro posted this photo of dumbbells on Instagram, we know for sure that we’re going to be seeing them come up.

What will the Open dumbbell movements be?

It’s unlikely that even Castro would goad boxes into panic buying expensive sets of dumbbells, if all we were expected to do with them was something as pedestrian as a farmer’s walk. What’s more likely, is that we’re in for either dumbbell squat cleans, or dumbbell thrusters, and if you haven’t been practicing either, good luck to you.

Who to watch during the European CrossFit Open

We’ve been a fan of Emma McQuaid for a long time, and after coming back strong from an injury, it looks like she’s in great shape, and ready to take a trip to the Games in 2017. She missed out in 2016 by a single place.

Another Games veteran who always does well at Regionals, we see no reason why Holte wouldn’t make it to back to California again. Holte has always been one to train smart as well as hard, tackling odd obstacles and pushing herself to new and uncomfortable places.

Helgadottir was incredibly close to making it to the Games last year, and that she ended up missing out has fuelled her training throughout the year. She’s one of the smaller athletes in the competition, but also one of the strongest.

Onto the men, and there are a few familiar faces we need to point out going into the competition.

It’s probably a given that we’ll see Gudmundsson not only at the CrossFit Games again, but also winning event after event at Regionals, as well. One of the best all-rounders the sport has, Gudmundsson is a contender to win the entire competition.

The youngest man to ever win the European Regionals, Koski is a repeat champion who’s been working hard to battle an injury this year. He looks as though he’s back up to speed, and with Former Games champion Mikko Salo behind him, we’re expecting Koski to be moving in 2017.

A lot of crazy fitness happened today @crossfitmetalize with awesome people 💪🏻. Here is an easy 265lbs hang snatch. After struggling with snatches for past 6 months I'm happy to finally have some consistency again. Big thanks to @murdokki and @laura_speedsters for helping me with that. @roguefitness @rogueeurope @zpcompression #nomoreweaknesses

A former Games competitor who we’ve talked about before, Hogberg puts in the work on the daily, making him one of the most effective athletes in the competition.

Vetter has amassed quite a following over the past year, and for good reason. As one of France’s top female CrossFitters, Jessica has an all-round awesome combination of fluid gymnastics and mean barbell work. We’re not the only ones to notice her, either, with sponsors including Progenex, Lululemon and Fitaid, Velites is in good company.

Stephane has been putting up some big numbers in competitions 2016, and when we sent him one of our VRopes Fire 2.0 jump ropes to try out, he went and did so holding a wall ball between his legs. Good man. Can’t wait to see Stephane get after it in the Open.

Whenever there’s a heavy barbell involved, France’s Alexandre Jolivet always puts on a show, and we couldn’t be more pleased to have this man mountain on our side. The guy can move, too.

Adams is one of the UK’s top CrossFitters, who performs consistently well at competitions, and after having an eye on him for a while, we’re beyond pleased to be able to providing him the kit he needs to smash it during the Open.

As both a former team and individual Regionals athlete, Alec Harwood is no stranger to competition. We’ve been rooting for this guy for years, and now that he’s on team Velites, we’re even more determined to see him make it into the top 5, and to the Games.

Drills to pay the bills, (Would love to pay bills with lifts!) some below the knee singles at 80% from yesterday's training. #xendurance #velitessport #workoutmotivation #snatch #80smusic #throwbackthursday (to yesterday) #metcon #nike #fitfam #instafit #jasonphillipsnutrition #rehband #rehbanduk

There’s a hell of a lot of talent coming out Ireland these days, and Jamie Headon, with his 150kg push jerk is no exception. Jamie puts in the work, and it shows, as one of the most well-rounded athletes on our list. Expect to see him putting up big numbers in the Open.

And of course where would we be without the Spanish talent? You may not have heard of Roberto Molina before, but we’re certain that if you look out for him during the Open, you’ll be impressed.

For the teams, we’re picking our homegrown talent and asking you to keep an eye on The Unit. As Spain’s top team, The Unit won both The French Throwdown and Compex Spain competitions last year, and with such a strong group of athletes, we’re certain that they’ll be pushing for some top spots at Regionals in 2017.

And there you have it, our picks for the ones to watch this year. Make sure you’ve got everything you need to do your very best during the 2017 CrossFit Open, including a brand new Velites Fire 2.0 and some of our awesome intense hand repair balm. Time to start practicing with those dumbbells.

Do you agree with our list? Who would you have included? Maybe you think you’re one to watch? Let us know. Visit Velites Sport on Facebook. Sign up for the Open here.